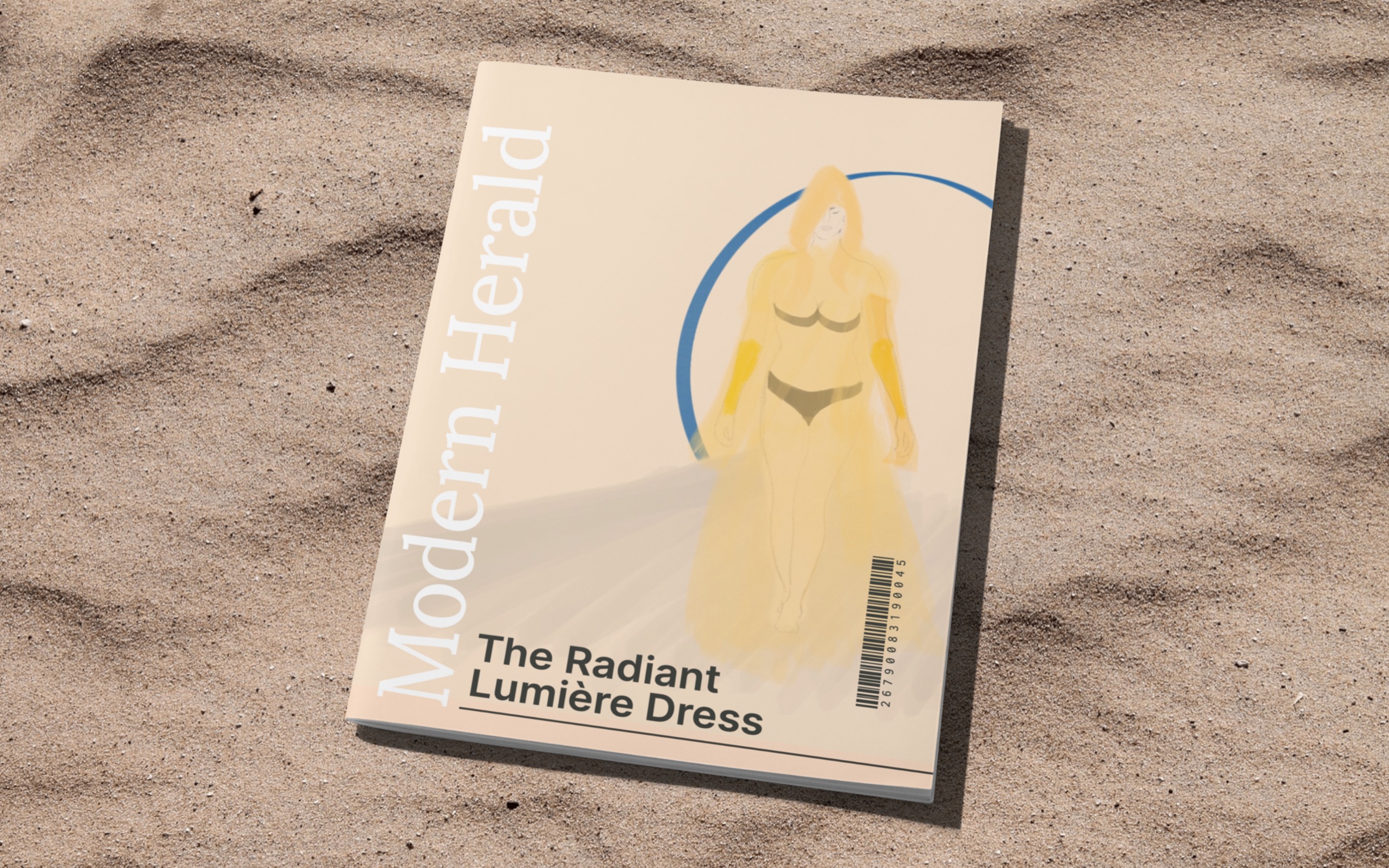 A future article written by a pretentious fashion reporter, who’s fed up with his modern world. Part of my series of imagined futures .

Welcome to my Swan Song. After seven years of writing fashion for the Modern Herald, it is over. Many a reason has led to this decision, with the final straw being wearing a hat for two weeks without knowing it. More on that in my ending epitaph, Fashion First!

This year’s collection is again a technophile’s wet dream; it’s hyper futuristic bravado, and I refuse to review it — with one exception. A unique look with a spirited and natural approach. It’s quiet and distinguished, dare I say sophisticated, or (gasp!) Stylish! Finally, clothing made for a James Bond instead of a Q.

My new devotion goes to Amare Abebe, a graduate of the École de la Chambre Syndicale de la Couture Parisienne, whose work kicked off the haute couture week. Meticulous attention to detail from the grand concept to the tiniest of fibers, his work integrates both the real and the unreal. How relieved was I that his work is less transfixed on the bane that is augmented reality. Exceptionally one of the models we could choose from was a person wearing the dress instead of the computer animations we’ve grown accustomed to over the past years. Sure, I may never see an actual cat-walk again, but his virtual shows were at least palatable: a stylish church-hall and a pleasant jungle setting. And I received materials from the collection. Abebe gave fashion its dignity back.

Abebe’s mindful modus vivendi shines through his pieces, cleverly combining the latest innovations from our engineering overlords. The piece de la resistance is his Lumière robe, a radiant dress. And I mean radiant! It uses a material called Quantum mesh, which is modern day magic. The Quantum mesh radiates light which bathes the model’s body in a faint glow that shimmers through the room as if the light leaves a trail of mystique behind it. The robe is partially translucent and (when the wearer chooses) opaque from certain angles. We can both see the body and are equally shaded from details. Clothing so mysterious, one has to see it to believe it. 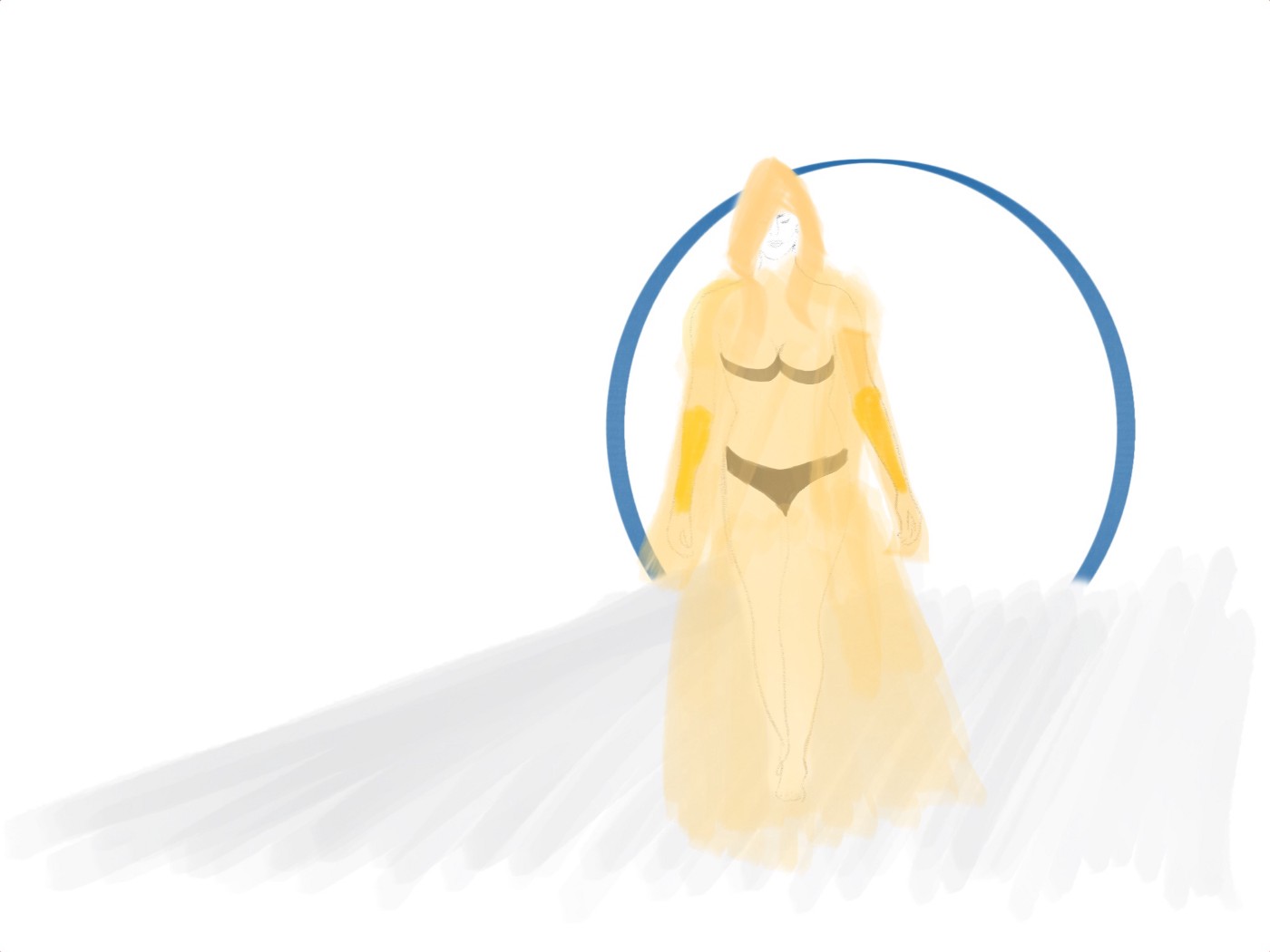 It is amazing that this material is real and not a virtual-reality imagination. It is equally amazing that Abebe and his team have succeeded in replicating the exact dress in augmented reality. Wearers of the latest gizmos (Android Glass 6.4, Apple Lens 9.2, or Harmony Glass 7.2) will see the light bouncing off of real objects and a beautiful blooming emanating around the wearer. But beware! As Abebe’s focus lies on accentuating natural beauty the dress cannot be combined with virtual body adjustments. No digital tummy-tucking or breast-enhancements allowed!

Let’s quickly forget the dreaded AR: there is A Real Dress. The mesh dazzles and sparkles. It captures the eyes and hits right in the heart. The cashmere-lined hoodie acts as a veil and both it and the robe demonstrate equal parts intimacy and openness. As if it’s made for an exhibitionist introvert, it screams ‘come closer’ and ‘stay away’ at the same time — always demanding our full attention, one can not look away. A power accentuated by a daringly plain and simple design.

This reviewer has only one problem: the mousquetaires, which needlessly distract from the overall form-factor of the dress. I’d advise wearers of the physical dress to keep them in their cupboards. Strangely, the accessory is not optional in the augmented-reality version: Abebe forces the wearer of the digital Lumière to wear the gloves. That’s the devil’s bargain of digital clothing: you can pick any style you like but you will never own it!

I’m happy to see clothes made from real materials that can actually be touched and more importantly worn. And even though the pricing of these delicate materials will be out of range for most of us for some time to come, it is my explicit hope to see people putting effort into their clothing again instead of slapping on jogging pants and relying purely on augmented-reality clothing. For God’s sake add some ‘zing’ to your life!

A farewell from fashion

I was excited at first for augmented reality fashion, but as my dear readers know my enthusiasm turned into contempt quicker than sunlight melts the snow. The future turned dystopian for this poor Luddite.

Everybody and their mother are wearing digitally, and it shows. Or should I say “doesn’t show”? It is saddening which blandness befell ‘real clothing’. Sure, augmentation opens unique ways of expression. Yet how quickly I grew tired of the extravaganza (monstrosities!). Imagine being seen with the eyesore that is Swanzay’s dress from the Antoinette-collection that looked like a rave-party that happened in the 17th-century… Or Caux Rocceau’s infamous twelve-foot feathered gaudy Derby hat?

And that, my friends, is exactly what happened to me. My life-partner “gifted me” Rocceau’s Derby hat without me knowing it. He thought it was a nice joke. Sixteen days my head bore this excrescence, for everyone with augmented glasses, lenses, and cameras to see. The emperor was wearing clothes. It made me realize that fashion is not my thing anymore.

For years this column was my special place for spouting my unfettered opinions. Alas, no more! My love for attire is unwavering, too bad there’s none around anymore. I’m looking forward to relying on basic income for a while and rediscovering myself. I’m signing off! Adieu, sayonara, goodbye!

Liked this article? Read the previous one: Does Europe’s new generation of never-meaters see the rest of us as murderers?

I’m trying out something new: I’m imagining future ‘news clippings’ from newspapers or other media. The goal is to be neutral: not overly optimistic but also not Black Mirror. Looking forward to your feedback! writing speculative futures