I’m trying out something new: writing speculative futures ! I’m imagining future ‘news clippings’ from newspapers or other media. The goal is to be neutral: not overly optimistic but also not Black Mirror. Looking forward to your feedback!

This first article appeared in a the magazine Family Matters, in the column “Parental advice wanted”. A father is struggling with his daughter’s wish for bionic arms… What would you answer? 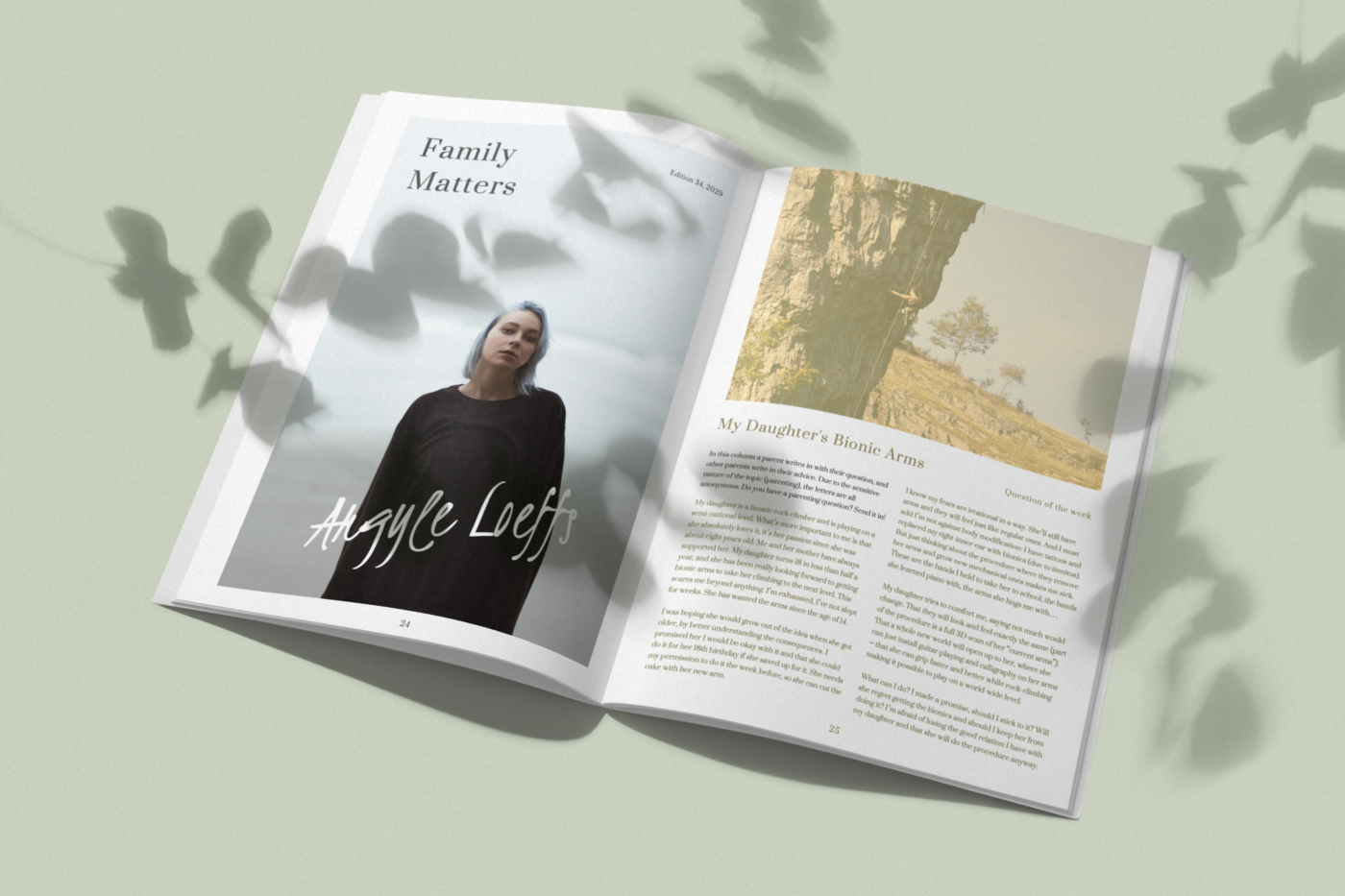 In this column a parent writes in with their question, and other parents write in their advice. Due to the sensitive nature of the topic (parenting), the letters are all anonymous. Do you have a parenting question? Send it in!

My daughter is a fanatic rock climber and is playing on a semi-national level. What’s more important to me is that she loves it, it’s her passion since she was eight years old. Her mother and I have always supported her. But now I am facing a difficult choice: support her wishes, or stop her from doing something I disagree with. My daughter turns 18 in six months and she has been looking forward to getting bionic arms to take her climbing to the next level.

She has wanted the arms since the age of 14. I promised her I would be okay with it and that she could do it for her 18th birthday if she saved up for it. I was hoping she would grow out of the idea when she got older, I guess I hoped she would understand the consequences and grow out of it. But instead she enthusiastically started harvesting money and she really wants to do this.

When she’s eighteen she can legally do it by herself, but she wants to do it 5 weeks earlier so she can cut the cake with her new arm. For her it’s a “father-daughter” thing, for me it is terror. I’m exhausted, emotional and depressed, I’ve not slept for weeks.

These are the hands I held to take her to school, the hands she learned piano with, the arms she hugs me with…

I know my fears are irrational in a way. She will still have arms and they will feel like regular ones. I’m also not against body modification in general – my right-inner-ear is a bionic replacement due to tinnitus. But just thinking about the procedure where they remove her arms and grow new mechanical ones makes me sick. These are the hands I held to take her to school, the hands she learned piano with, the arms she hugs me with…

My daughter is optimistic and thinks not much would change (part of the procedure is a full 3D-scan of her “current arms”, they’ll look and feel the same). That a whole new world will open to her, where she can install ‘apps’ like guitar-playing and calligraphy on her arms — that she can grip faster and better while rock-climbing making it possible compete in climbing on a world-wide level.

It scares me beyond anything.

What can I do? I made a promise, should I stick to it? Or will she regret getting the bionics and should I keep her from doing it? I’m afraid of losing the good relation I have with my daughter and that she will do the procedure anyway.

Do you have experience in bionics? Or other advice to give to this father of a 17,5 year old girl? Write in! All answers will be forwarded to the family and we will publish the best three together with expert-opinions. All answers will be anonymous.

That was my first “speculative futures” article. Liked what you read? Continue to the next article: Does Europe’s new generation of never-meaters see the rest of us as murderers?