Two years ago, I participated in the first edition of the Rijswijk Talent Award. It was a great experience. I got challenged to do something new, and got a lot of recognition for it (I won!). This year there was a new edition, and of course I couldn’t resist participating and even my daughter entered the competition!

The theme this year was “transition”, which I found quite challenging. The concept is very vague and difficult to grasp, and at the same time applicable to nearly everything.

The definition as given by the organization was “a meaningful journey between states”.

I took that as a starting point and realized ‘transition’ also has to do with perception. There can be no transition, without someone consciously deciding ‘something’ changed from one state to another state (or classification). If a lamb ‘transitions’ into a sheep, when exactly does that happen? And does the lamb or the sheep care? I don’t think so, there needs to be human perception to care about this difference, and attribute a change in classification.

Of course animals can see the difference between a lamb or a sheep, but I don’t think they have the realization that there is a ‘meaningful journey’ between the two states.

Furthermore, nature is always in a state of flux, always changing. Any change in state is temporary, or transient. Only in our human timescale do we see this ‘meaningful transition’ between two resting states.

With this, I started collecting examples of transitions: the energy-transition, gender-transition, life to death, boy to man (which I thought was an interesting one, because of the traditions and rituals associated with it, like a Bar Mitswa), stranger to friend, friend to lover, lover to partner, actors changing into a character on stage, life before and after corona, human to robot, employee to manager. One transition I saw happen a lot in Rijswijk was a transition of a green garden into a parking lot…

This lead me to some more definitions:

In any case, a transition usually pairs with some chaos and uncertainty. It requires energy at first (endotherm), but can also generate energy (exotherm). Transitions can be permanent, temporary or cyclical (like the seasons).

I also found the Satir Change model applicable: Old status quo -> foreign element -> chaos -> transforming idea -> practice and integration (growth) -> new status quo Especially the idea of the ‘foreign element’ made a lot of sense to me, something that triggers the transformation or transition.

What I sent in

In the end I wanted to send in an interactive, personal, never-ending art-work that had a relation to the art-work I sent in two years back.

I only partially succeeded. The art-work is definitely infinite, but it is not interactive. The link to two years ago is also very vague: they are both boxed-in animations with a relation to my history with Artificial Intelligence. That’s also my only personal link.

Still, I’m quite happy with my submission.

I took inspiration from the Conway’s Game of Life and created a simulation that continuously triggers transitions of one state into another. Not every transition is successful, some die off before taking over. And often, there are multiple transitions happening at the same time: when the old status quo is becoming unstable. 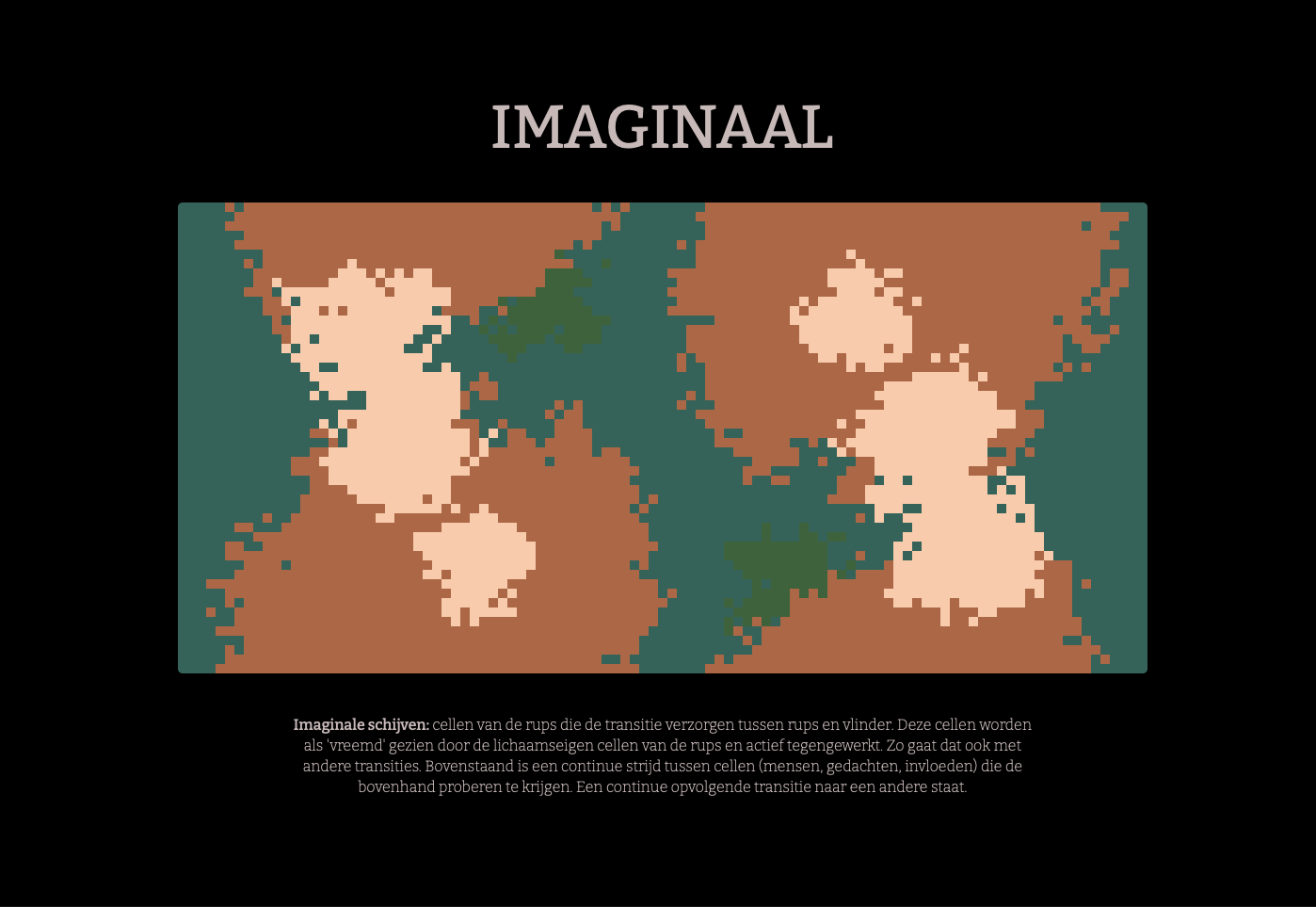 I imagine these are transitions in a society, such as acceptance of women-rights, gay-rights, a sustainability craze, or a negative transition: war and strife, a far-right political party winning elections…

I got nominated for a prize, but didn’t win.

But the true result is that I got my daughter enthusiastic in joining, and that she made an amazing art-work as well. That’s my real prize. 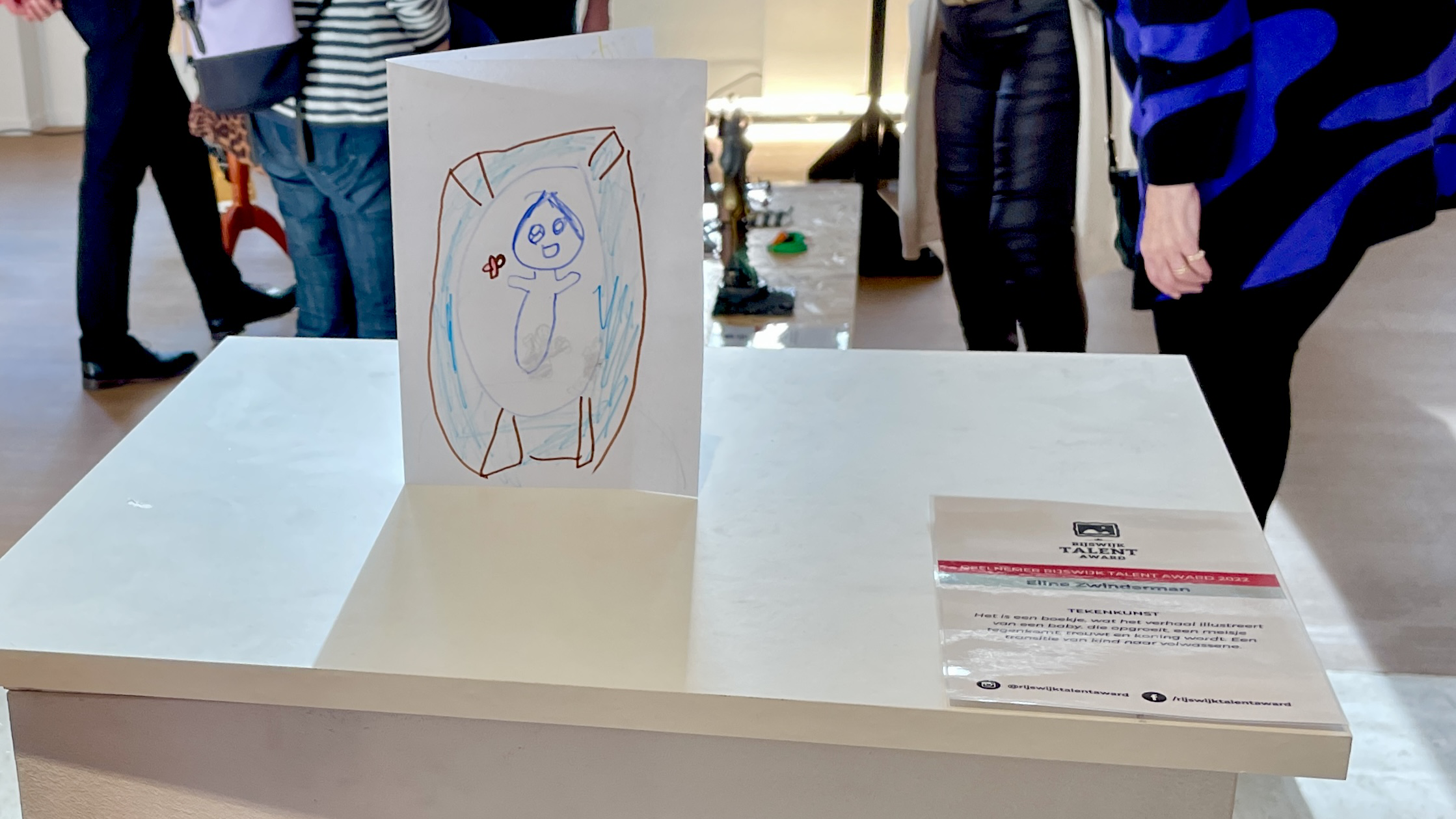