As part of my scouting career (8 years as scout-leader and 20 years as member) I’ve invented a lot of games. These are all in Dutch, but if anybody wants, I’ll translate them to English.

I’ve made a selection of three successful games that can be played straight away. In the future, I might publish some more.

update 2018: here are some more games, and part three

A tradegame for children in the age of 7-11, but with some adjustments it could be fun for all :) It is an active, outdoor game that needs at least 6 people to guide it, playing time is about an hour and preparation time also. We’ve played the game a lot, with groups ranging from 20 to 50 children. 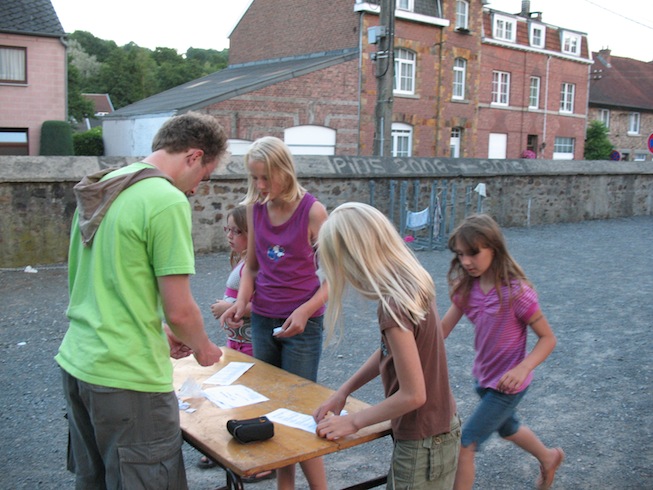 A roleplaying game for 16 and up. Somebody has stolen drugs and money from the maffia and the Don requires help from his maffia-groups to find out whodunnit :) There are 6 roles in the game and playing the game takes about an hour. I wrote the play completely by myself for a group of nine players. It was a huge success! The roleplaying game is now played yearly with a student group and was performed with some other groups, with over 50 people.

A game played with walkie-talkies, for ages 16 and up. Requires at least an hour of preparation. There are as many groups as there are walkie-talkies and one of these groups is the ‘spy’. The spy tries to find encrypted messages that are hidden on trees and send the message back to the ‘base’. The other groups are anti-spy teams and can hear all the communication on their walkie-talkie, they have to capture the spy (after which the anti-spy team that caught the spy becomes the spy themselves).

It is a very exciting game that is best played in the dark.