Dutch Designer: What do you do?

I think function titles in the digital design field are misleading. To test that theory I had 83 people fill in a mega-survey, and I found some very interesting results! Did you know that the fabled UX/UI-designer actually exists? And that Product Designers are very modest? Also, we finally find out what a Product Designer really does! 🤣

In my questionnaire I asked people which function-title they give themselves and which titles others use to describe their work. Based on this I found 8 groups (UX Designers, Interaction Designers, etc.). I also asked them to rate themselves on a scale of 1–5 on various skills (52 skills in total!) and with that I’ve got a good overview of the skill-level per function-title.

Who are these people? What do they do? What drives them? And how does that relate to you: should you change your function-title on LinkedIn? 🤔

I’ve grouped these together because these professions offer a very similar toolset. Here are the main differences:

For wire framing, sketching and interactive prototyping all three share a high skill-level. If you can choose it’s wise to pick the UX/UI Designer because they have a very diverse skill-set (rating 24 of their skills above average and an impressive 10 skills at 4 stars or more). 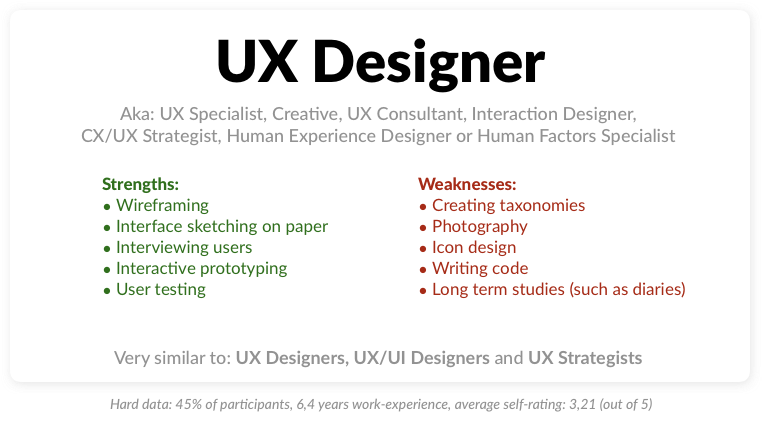 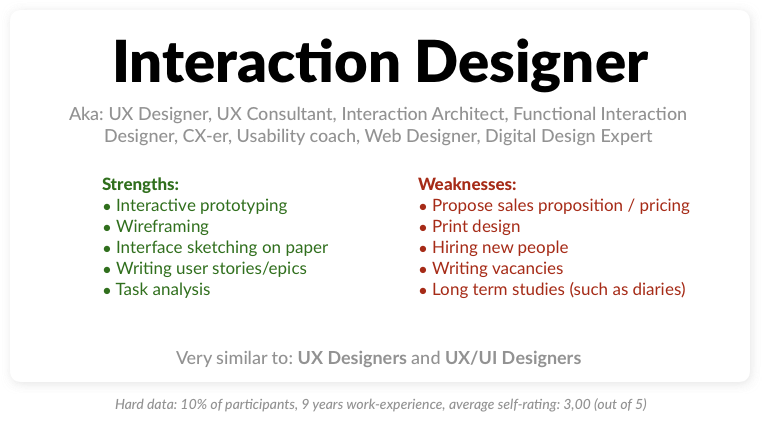 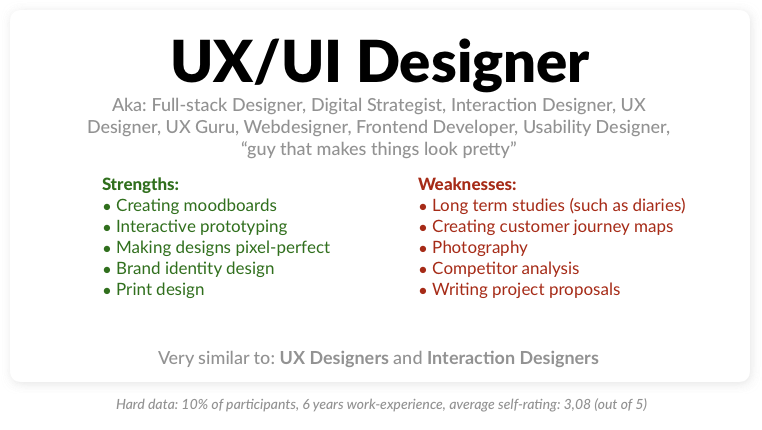 For all you statistical nutters: I didn’t adjust for average years of experience (UX Design have 2,5 years less work-experience) or normalize for the average score people gave themselves (UX Designers rate themselves higher than the overall average: 3,16 vs 2,89). Read more in my analysis article!

This is such a cool function-title, I wish I had it 🤣. The UX Strategist is very similar to Interaction Designers (and less so to UX Designers), but not similar enough to justify pooling them together.

UX Strategists look more at the overall picture and focus on guiding others. Their strengths are facilitation, coaching, training and setting up information architectures. They also score themselves much higher than others on writing vacancies, proposing sales proposition, hiring new people, reviewing performance of others, creating a content strategy and writing project proposals / tenders.

If you’re looking for someone for research, a UX Strategist seems less of an obvious choice (see also the big-table below). 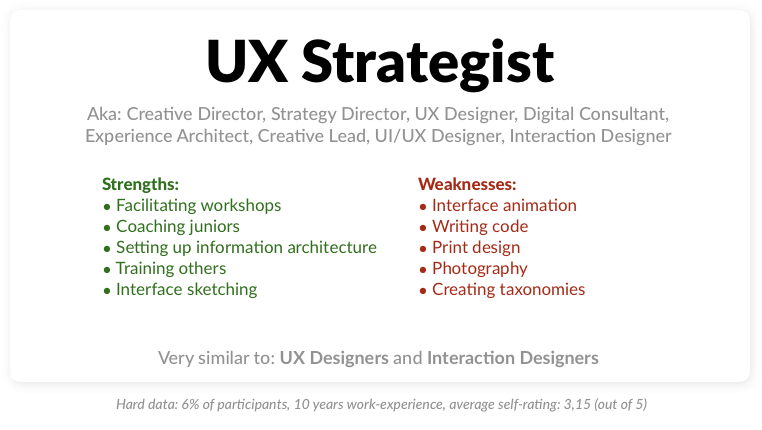 That means a Digital Designer is not the right fit for research and analysis or taxonomies, but they excel at everything to do with visual design: design-handoff to (frontend)development, making designs pixel-perfect, style studies (typography, colors), interface sketching on paper, creating design systems, print design (business cards, envelopes, etc.), create or update styleguide and interface animation. They also rate themselves highest at testing frontend code in different browsers for bugs.

From my analysis it seems that the skills of individual Digital Designers diverge a lot. They have the highest variances in their answers (e.g.: one half of the group indicates a 1 while the others indicate a 5). Especially for the skill “creating or maintaining a design system” the answers are all over the place. Perhaps there can be a vote at the next Digital-Designer-conference if that task is part of the job :) 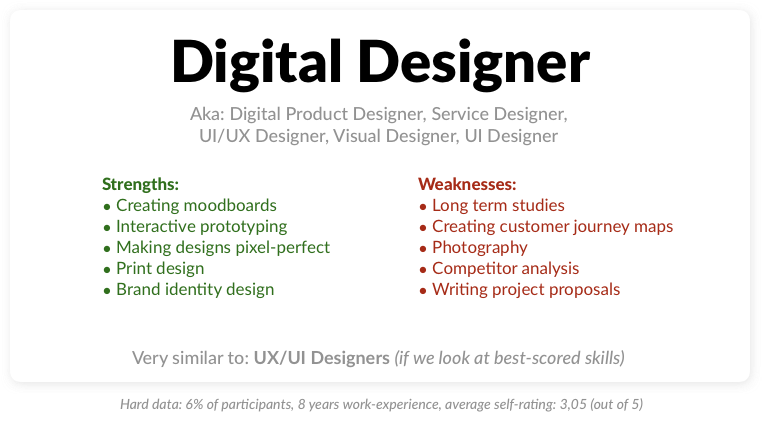 They would immediately ask me what kind of product. Furniture, airplanes, radios, headphones, sex toys? Embarrassed, I would clarify that I meant digital products — “you know, like websites and apps.”

Based on the self-assessed skills in my survey we can say the Product Designer is a kind of ‘UX Designer’-light. They don’t score higher than UX Designer even on the highest-rated skills (also UX/UI Designers and UX Strategists are better at almost everything than the Product Designer). As a matter of fact: in the average scores there’s nowhere they score higher than 4 points! That’s unique among all other groups.

But is it (false?) modesty? Or is there more? One participant in the survey answered 1 or 2 stars for every skill, even though (s)he is a senior designer with 8 years of experience. I am afraid this is because of my form-design: if you entered the survey on a very small mobile phone, the last three columns (with 3, 4 and 5 stars) could be cut-off. I checked and luckily this is the only outlier.

Another explanation is that the amount of relevant skills is not distributed nicely over the groups (there were more skills listed for UX designers than for researchers, for instance). One “Product Designer” apparently works more on physical products and because of that rates him/herself much more modestly on ‘digital’ skills ((s)he listed a lot of skills missing in the questionnaire: PCB Design, CAD modelling, Sourcing and Hardware Design).

With an average of just 4,5 years this is the group with the least work-experience. But that doesn’t stop them from being ambitious: they rate themselves higher than a 4 on no less than 15 skills! No wonder they are the least-modest group, with an average self-assessed skill-level of 3,4 (out of 5).

Especially interesting with this group is they are the only ‘designer’-group who are good at long-term studies and they can uniquely combine this with creating customer journey maps, user journeys and storyboards. They are great at all kinds of user-related research, but not so much at other types of research (competitor analysis or web-analytics, for instance).

Because of this diverse skill-set they don’t share any similarity with the other participants from the dataset. 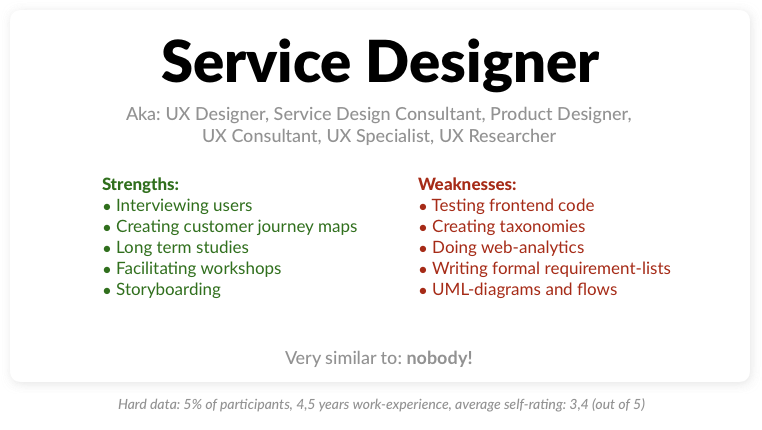 Last but not least, another outlier group: the UX Researchers. Their skill-set has the least similarity to that of any other group.

Obviously the research-skills are very highly self-rated (except content analysis, strangely), just like formalizing the results of that research: creating personas, writing user stories/epics, creating customer journey maps, creating taxonomies, drawing user journeys. The weak-points lie in creating detailed designs: for instance they are the only ones who rate themselves very low at creating interactive prototypes, wireframing and sketching interfaces.

Time to compare skills in a giant table!

No article is complete without a huge table, am I right? The table below shows what these groups are good/bad at.

Pro-tip: print the table (in colour) and use it as a checklist: see if your skill-set matches with your function title! Or find out which header you should put above your next job-vacancy!

I’m really interested in knowing which parts you find most interesting from the table below. Let me know with a comment!

Some quick thoughts: UX/UI Designer are very versatile, rating 24 skills above average! While Product Designers and Digital Designers are too modest: rating over 20 skills below average… And strangely nobody seems to do lean-startup-experiments. And how come nobody is good at web-analytics or competitor analysis? Is that a skill-gap, or more a job for marketing?

Based on the answers people gave, I calculated how similar certain function-titles are to each other (more details in my background article). I’ve used those results in the ‘similar to’ section of the cards. Interestingly, it seems the groups are more distinct than I initially expected. Perhaps a function-title does say something about your skill-set!

Every good article needs a conclusion. I started off with my hypothesis that a function-title doesn’t say much. Does that still hold true?

I think my research has shown that there are common factors behind a function-title, so on first glance it appears that title has some merit and you can judge a book by its cover. But! A lot of people don’t communicate their function-title. You can see that in the ‘aka’ section in the cards above and there is a lot of overlap. So even though a person might think of themselves as “Interaction Designer”, they might communicate something else on their LinkedIn profile.

On top of that, the division in 8 groups is not the most optimal way of distributing the survey participants. If I let a machine-learning algorithm do the grouping, only 2 or 3 groups remain. So maybe there are new (better?) function-titles we can come up with still!

I’d love to discuss these results with you! Just send me a message on LinkedIn, or press the applause button below for a while on the original article on Medium ;)

Want to know more details? For instance which two groups a machine learning algorithm thinks there are in the Dutch Design World? Read my ‘behind the scenes article’.