Update on my survey (Digital design in the Netherlands)

This article was first published on Medium

I recently conducted a survey about what designers do in the Netherlands and what function-titles they give themselves. I’m still in the middle of my analysis but I thought I’d go ahead and share an update with y’all.

(this is just an update for survey-participants, the real deal will come later)

I created a survey with questions for designers working on digital stuff in the Netherlands. I spammed everybody through my LinkedIn so if you have no clue what I’m talking about, you should probably connect with me. The survey is now closed. Anyway, you should consider yourself lucky if you didn’t fill in the survey, it had a humongous amount of radiobuttons, which was rightfully complained about.

Who filled in my survey?

83 people participated in my survey! I’m really happy with that number :) The average participant had over 10 years of experience, but not all of the participants were that experienced: 42% actually worked 5 years or less! 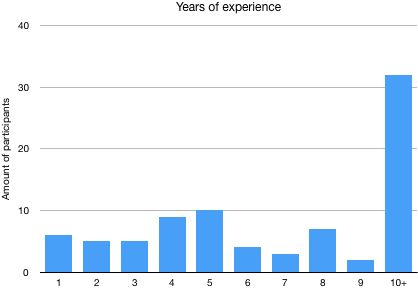 Lots of experienced people, but still a fair mix: 40% worked 5 years or less

I figured most people would be working in an agency or business, but to my surprise the largest group (33%!) is freelancing. Probably the heavy promotion of the survey by Glenn 😎 Agencies are the second biggest group, after that comes a mix that might be pooled together (consultancy, software, finance, insurance, enterprise). I also found out there are things you can work on that I never heard of before: customer success solutions and midlance. 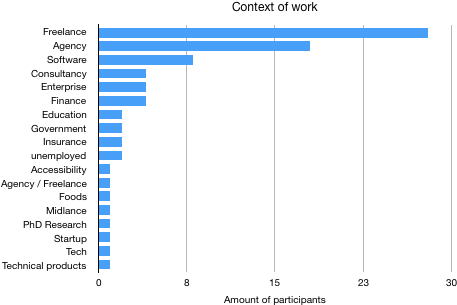 Wow, that’s a lot of freelancers!

What’s in a name?

The first question in the questionnaire was: “What function-title do you give yourself?”. It’s a fun question but I should have provided a dropdown here instead of a free-text field: you all got really creative 😂 As expected the biggest group calls themselves “UX Designer”, but most participants actually call themselves something else. 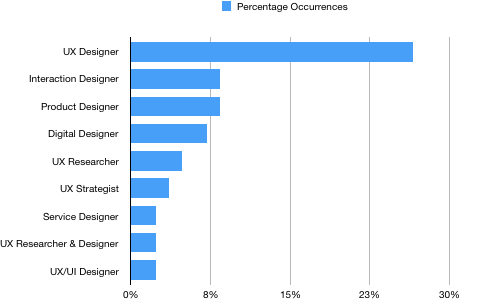 What do you call yourself?

Sneak peek at the skills mentioned…

I asked people for their skill-levels (with the incredibly large list of radiobuttons). This is the most interesting part and also the most difficult to analyse. I’ll get back to that indepth, for now two quick take-aways:

Yes, your privacy is important! And you trusted me with some very personal data. So, first things first: I won’t share data-files with others and I’ve already decoupled all names and email-addresses from other data (in other words: I cannot link your skill-levels to your name). I will only write about aggregate data: you won’t be able to link anything to a specific person 😎

Mostly I just do some Excel-magic (as much as possible in Apple Numbers, because Excel drives me nuts). And on top of that is a secret sauce of Bash-tools like Vim, sort, uniq, etcetera (because I’m a nerd). Most likely I’ll turn to Orange Data Mining for creating clusters and some funky visualisations.

I will proceed with a more structured analysis, which is going to result in at least three more posts. The first being a post about why I did this and the third a dive into job-listings to see how the survey-results map to all the vacancies out there.

Looking forward to seeing you in my next post!

Thanks everybody for filling in my way-too-long form with too many radiobuttons. It was especially hell to fill it in on a mobile device. I’m very proud of the 83 people that pushed through, you all deserve a medal 🏅 Special thanks to Glenn Veugen and Azadeh Shirzad for proofreading and helping me promote my survey.